Housing Prices Are on a Tear, Thanks to the Fed 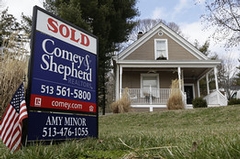 The U.S. housing market has broken out of a deep slump, and prices are shooting up faster than anyone thought possible a year ago. For many homeowners, that is a cause for celebration. But the speed at which prices are rising is prompting murmurs of concern that the Federal Reserve's campaign to reduce interest rates could be giving the housing market a sugar high. Prices of existing homes rose 10% in February nationally from a year ago. They have been rising during the seasonally slow winter months—and they show signs of jumping further as the spring buying season gets under way. What's going on?

First, inventories of homes available to buy have fallen to 20-year lows. Home builders have added little in the way of new construction since 2008. Banks are selling fewer foreclosures. Investors have scooped up more homes, converting them to rentals. Many borrowers, meanwhile, aren't willing or able to sell at prices that are down sharply from their 2006 highs, despite a greater inclination among banks to approve short sales. Tight lending standards mean some owners will hold back from selling because they aren't sure they would qualify for a mortgage on their next home.

Demand has also revved up, first from investors buying homes below their replacement costs, and later as rising rents and falling interest rates encouraged more first-time buyers to purchase homes that have monthly payments that are less than what it costs to rent.

Improving home-price expectations have also unleashed pent up demand. The U.S. added around 1.3 million households a year for the 10-year period ending in 2007, after which household formation fell to more than half that level. Household formation was lower in the five years following the housing bust than any period since the 1960s, according to Altos Research, an analytics firm in Mountain View, Calif. But the population never stopped growing. Households simply doubled up. Between 2008 and 2010, the country had around two million households that "couldn't wait to launch on their own," says Mike Simonsen, chief executive of Altos Research. Many of those new households have been renters, but more are opting to buy.