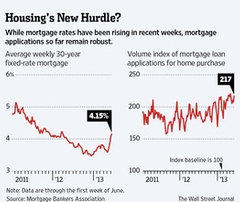 Rising mortgage rates are pushing up the cost of buying a home just as more local markets are seeing prices and sales climb, but economists say that unless rates move substantially higher the increase is unlikely to derail the U.S. housing recovery. Mortgage rates have jumped above 4% for the first time in about a year, hitting 4.15% in the first week of June, up from 3.59% five weeks earlier, according to the Mortgage Bankers Association. The rise represents a 15% increase in the cost of borrowing, or around $50 in the average monthly payment on a $192,800 home, the median price of a previously owned home in April.

Sarah Milligan and her son Corbin at her parents' home in Glendale, Ariz., check out a home listing in Phoenix's very competitive market.

Buyers, while not exactly pleased, have so far taken the rising rates in stride. Sarah Milligan, a 35-year-old teacher from Glendale, Ariz., who has been hunting for a house in the $140,000 range, recently got a disappointing call from her mortgage broker: Her prequalified mortgage rate is now over 4% from just below that level.

Ms. Milligan, who currently rents a three-bedroom house, says the rate increase won't change her decision to buy, but she said it could move up her timing: "I should probably try to get one as soon as I can."

While the rise in mortgage rates remains restrained for now, any prohibitive increase could hurt the housing market and the broader economy, which has been buoyed by the real-estate rebound. Already, the recent spike in mortgage rates has produced a sharp drop in refinancing activity, which is much more sensitive to rate increases.

Low mortgage rates have allowed home buyers to absorb the double-digit percentage rise in prices seen in many regions over the past year. A rule of thumb holds that every one-percentage-point increase in mortgage rates makes homes about 10% more expensive for buyers.

The concerns about rising rates are playing out in the stock market. Investors have sent the Dow Jones U.S. Home Construction Index down 7.6% over the past four weeks, compared with a 1% drop for Standard & Poor's 500-stock index.

But home builders appear to be unfazed. An index measuring builder confidence hit its highest level in seven years during June, the National Association of Home Builders said Monday. The index rose to a reading of 52, up from 44 in May and the first time since April 2006 that it moved above 50, which indicates more home builders view sales conditions as good rather than poor. Many economists say the home market is well-positioned to keep growing, though they say rising rates could slow the pace of price and sales gains.