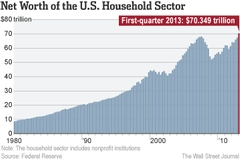 Americans are rebuilding much of the wealth they lost in the recession. The net worth of U.S. households—the value of homes, stocks and other investments minus debts and other liabilities—rose 4.5%, or about $3 trillion, in the first three months of this year to $70.35 trillion, the highest level since at least 2007, according to a Federal Reserve report released Thursday. The recession began in December 2007 and ended in June 2009. For the past five years, U.S. consumers have struggled to recover from the damage inflicted on their balance sheets from the housing crash and recession. Now data suggest that stock-market gains and a revival in the U.S. housing sector are boosting Americans' wealth—a trend that over time could make them more prone to borrow and spend, boosting the overall economy.

Granted, the Fed's figures aren't adjusted for inflation or population growth. Adjusting for rising costs, Americans still have a way to go before they recoup the wealth they lost in the recession.

Households' rising wealth also masks significant differences between the affluent, who tend to own stocks, and the less affluent, who were disproportionately hit by the nation's housing crash because their largest financial asset tends to be their home. While the U.S. stock market has soared to record levels, home prices, despite recent gains, remain well below their prerecession peaks.

Still, the rising wealth of U.S. households is a positive omen for the nation's sluggish economy, which grew at an annualized rate of only 2.4% in the first quarter.

Home prices rose about 3.5% in the first quarter, while the Standard & Poor's stock index rose over 7%. That's spurring an improvement in household finances that, in turn, is making U.S. consumers more confident about the recovery than they've been in five years.

Rising confidence could trigger more borrowing and spending—and if there's more demand for goods and services, that could spur more hiring, fueling a virtuous circle. Increased wealth also could improve the creditworthiness of Americans, possibly making it easier to borrow.

At the same time, rising wealth is cushioning consumers from some of the drags coming from budget cutbacks and the expiration of the payroll-tax holiday in January. The upshot: Consumers are now playing a pivotal role driving the nation's economic recovery, even as other parts of the economy, like U.S. exports and manufacturing, languish.